"Have you ever observed that we pay much more attention to a wise passage when it is quoted, than when we read it in the original author?"

Thomas of Ireland's Manipulus florum ("Handful of flowers") belongs to the genre of medieval texts known as florilegia, anthologies of authoritative quotations that are the forerunners of modern reference works such as Bartlett's Familiar Quotations and The Oxford Dictionary of Quotations. This particular florilegium contains approximately 6000 Latin proverbs and textual excerpts that are attributed to various classical, patristic and medieval authors. Compiled in Paris at the beginning of the 14th century (1306), it survives in over 200 manuscripts and was published in over 50 editions between 1483 and 1887, making it by far the most widely-disseminated and, presumably, the most influential anthology of Latin quotations produced during the Middle Ages.

Translation of the Preface to the Manipulus

Thomas de Hibernia’s Preface to the Manipulus florum, translated by Chris L. Nighman from the edition of Mary A. Rouse and Richard H. Rouse, Preachers, Florilegia and Sermons: Studies on the Manipulus florum of Thomas of Ireland, Toronto: PIMS Studies and Texts 47 (1979), pp.236-8.

This project provides transcriptions of thirteen public-domain texts of Latin sources that were compiled as part of the Manipulus florum edition project.

Online resources that may be of interest to users of this website, including Internet resource websites that link to The Electronic Manipulus florum Project. 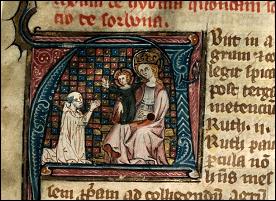 Copyright image used with kind permission of the Bibliothécaire of the B.M. Charleville-Mézières